Holle baby formulas are one the best-selling and most popular formulas on the market, especially Holle Stage 1.

Lebenswert was introduced by Holle over 10 years ago as a slightly more affordable organic baby formula option, and has quickly become very popular among discerning and budget-conscious parents. 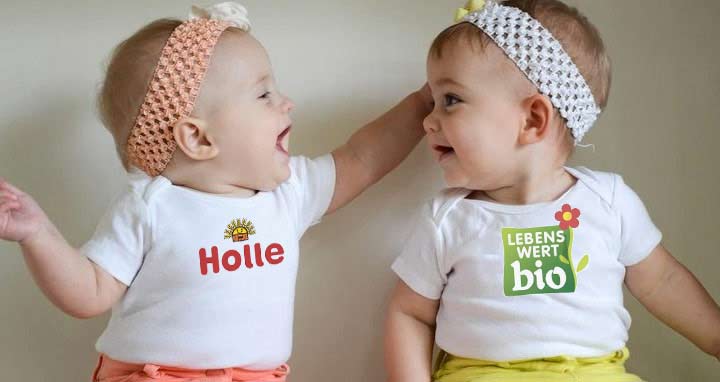 But which is the best baby formula for your family?

We tested both options and pulled together the data on ingredients, nutrition, farming and manufacturing practices, infant acceptance and tolerance, sensitivity, and pricing.

In combination with our own reviews of the two products and our summary of parent reviews, we hope our review helps you decide whether Holle or Lebenswert is the better option for your child!

What makes us unbiased? We do not manufacture, distribute, or sell baby formulas. For that reason, we have no allegiance to any manufacturer and we don't need to worry about offending Holle (which is also the parent company of Lebenswert!) with our honest opinions!

On Reddit they say tl;dr or "too long; didn't read" - in other words, save me the time and just give me the results!

Here's what it boils down to:

✔️ Lebenswert Formula is better for parents looking for a baby formula that does not contain maltodextrin or starch in Stage 1, and is a bit more competitively priced than Holle.

Below we outline how we arrived at this conclusion, and our comparison of ingredients, nutrition, farming and manufacturing practices, tolerability and sensitivity, pricing and availability, and parent reviews.

Ingredients in Holle and Lebenswert

Infant formula is one of the most strictly regulated food products on the market, and for good reason. Parents want to be sure they are feeding their infants the best possible ingredients during the most formative time of their lives.

The Lebenswert formulas are available in three Stages: Stage 1 for 0+ months of age, Stage 2 for 6+ months, and Stage 3 for 10+ months. Check out our Lebenswert formula review to see the full list of ingredients in each stage.

Previously, Holle had a leg-up on Lebenswert due to the addition of omega-3 (DHA and ALA) and omega-6 (LA), which Lebenswert was slow to add. As of 2021, however, the European Union now requires DHA in all infant formulas.

As a result, both Holle and Lebenswert formulas now contain fish oil, making their ingredient composition very similar, especially in Stages 1+ (not Pre).

Which has the better ingredients?

✔️ Lebenswert is better for carbohydrate sources, given that Lebenswert Stage 1 does not include maltodextrin. Holle Pre also does not contain maltodextrin, but that is a relatively niche formula.

✔️ Lebenswert and Holle are Similar for fat sources, with both using palm oil, rapeseed oil, and sunflower oil in all stages.

✔️ Lebenswert and Holle are Similar for prebiotics and probiotics, with neither containing these nutrients.

✔️ Lebenswert and Holle are Similar for Omega 3 and 6 fatty acids, with both including healthy fish oil (DHA) and plant oil-based sources of alpha-linoleic acid (ALA) and linoleic acid (LA).

Fats: All stages of Lebenswert and Holle supply additional fats with palm oil, rapeseed oil, and sunflower oil. The overall fat content of Lebenswert used to be low relative to Holle, but the recent addition of fish oil has made them very similar.

Prebiotics and Probiotics: Neither Holle or Lebenswert included added prebiotics or probiotics. Definitely check out HiPP formulas if you're interested in a formula with these ingredients. Note that the EU is likely introducing new prebiotic and probiotic regulations for formula, and we'll update this article when we learn more.

Omega Fatty Acids: Both Holle and Lebenswert formulas provide Omega-3 and Omega-6 fatty acids, including LA, ALA, and DHA. Both varieties include fish oil. Note that DHA is a mandatory ingredient in the EU for infant formulas.

For ingredients, therefore, Lebenswert wins by a small margin because it excludes maltodextrin in Stage 1; Holle, on the other hand, includes maltrodextrine in Stage 1. Maltodextrin is a carbohydrate with a very high glycemic index, meaning that it is quickly and easily digested but also a poor energy source. Research at the Cleveland Clinic suggests that maltodextrin causes blood sugar spikes and may not be great for maintaining healthy flora in your gut microbiome.

Nutritional Composition of Holle vs Lebenswert

Nutritional composition is very similar between Holle and Lebenswert in terms of basic macronutrient and micronutrient profiles.

For macronutrients, both Lebenswert and Holle meet international food standards established by the World Health Organization for macronutrient content. Per 100kcal of formula, these regulations are as follows:

Notice how close Holle versus Lebenswert are to one another in terms of all three macronutrients. If anything, Holle has slightly higher carbohydrate and protein levels in comparison to fats. This difference is rather negligible.

✔️ Holle and Lebenswert are Similar for macronutrient composition: carbohydrates, proteins, and fats.

For micronutrients, including not only vitamins and minerals but also Omega fatty acids, both Lebenswert and Holle meet WHO international food standards.

Neither baby formula appears to include ARA, the Omega-6 arachidonic acid.

✔️ Holle and Lebenswert are Similar for their micronutrient profile, with both containing Omega-3 and Omega-6 fatty acids, and neither containing prebiotics or probiotics.

If you've read our full Holle formula review, you know how impressed we are with Holle's ingredient sourcing, farming practices, animal husbandry, and sustainable farming and manufacturing practices.

Holle is based in Germany and sources its milk only from organic and Demeter-certified farms in the EU, which comply with a very stringent set of practices involving annual certification and maintenance.

The dairy cows on these farms are permitted to graze freely on rich biodynamic pastures, and are treated humanely without de-horning or high stress. This results in higher quality and better-tasting milk, with a fantastic macro- and micronutrient profile. These are the milks used in Holle formulas.

If you've read our full Lebenswert formula review, you know that Lebenswert formulas are made in Austria and the milk is sourced from a range of organic biodynamic farms spread across the EU. While these farms must conform to stringent EU organic food regulations and are very likely providing high quality milks, they are not necessarily rigorously monitored and evaluated like the Demeter farms used by Holle.

We believe this is the primary reason why Lebenswert is slightly less expensive than Holle.

Both Lebenswert and Holle also conform to rigorous manufacturing standards and employ hundreds of quality checks conducted by themselves and independent certification institutes.

We are confident that both Holle and Lebenswert have high manufacturing quality, highly reliable formulations, and undergo frequent and strict inspection for trace chemicals and heavy metals.

✔️ Holle and Lebenswert are similar for complying with, and often exceeding, modern manufacturing standards and practices.

Note that while Holle may have higher quality ingredient sourcing, there is no evidence that this translates to any specific advantage of their formulas in terms of nutrition or trace chemicals.

This is a complicated question and depends on which stages of the formulas you're comparing.

The Pre stage of Holle is based on whole milk (like Kendamil), which can be difficult for babies to digest relative to skim milk formulas. Holle Stages 1+ all use skim milk instead of whole milk and show high acceptance, tolerance, and digestibility.

All Lebenswert stages use skim milk instead of whole milk, and tend to show very high tolerability for newborns and infants. Not as great as HiPP formulas, but very good.

✔️ Holle and Lebenswert are Similar for overall tolerance and sensitivity.

The only outlier is Holle Stage Pre, which is a bit more difficult to digest. However, note that Holle Stage 1 is is also suitable for birth onward, making the Pre version completely optional.

In our European baby formula price comparison table, you will notice that Holle tends to cost about $1.80/ounce unless purchased in bulk, which can get the price down to about $1.60/ounce.

Lebenswert, on the other hand, tends to cost about $1.65/ounce when purchased in single packages (usually 500g), with discounts in bulk that get the price down to about $1.40/ounce.

Note that you can use our coupon code mommyhood101 at Organic Start for 10% off Holle or Lebenswert formulas!

✔️ Lebenswert is better for price, coming in at about 8% cheaper than Holle. On average, that will likely save you about $10 per month on formula by using Lebenswert instead of Holle.

Both Lebenswert and Holle are widely available online (but not in US stores), and neither tends to go out of stock at major suppliers.

While parent ratings may be filtered or otherwise altered by these companies, they provide a good indication of overall parent opinions about Lebenswert and Holle.

That difference is negligible (statistically and practically speaking), though there is a slight trend towards Lebenswert showing slightly higher parent satisfaction.

When they are negative about Lebenswert, they tend to use words like No DHA and Gas.

Note that while previous versions of Lebenswert did not contain fish oil, they now have great DHA levels. Other than that, negative reviews of Holle and Lebenswert tend to focus around similar concepts.

Holle vs Lebenswert: Our Overall Thoughts

If this were a tournament, Lebenswert has 2 wins going for it, whereas Holle has 1. They tied in 8 of the competitions.

Overall, they are pretty close! Lebenswert wins for price and the exclusion of maltodextrin in Stage 1, whereas Holle wins for ingredient sourcing, animal welfare, and sustainability. Other than that, these two formulas are very similar to one another! As of 2021, Stages 2-3 of Lebenswert also contain starch in addition to maltodextrine, which we don't love.

Your determination of whether Holle or Lebenswert is better for your child is likely more nuanced than that.

Both Holle and Lebenswert are amazing simple formulations, without any added chemicals, preservatives, artificial ingredients, or any of the nasty stuff included in many American baby formula brands.

Holle is the parent-company of Lebenswert and prides itself on not including any artificial DHA or ARA sources in their formulas, citing the potential dangers of DHA and ARA extracted using hexane.

Overall, we believe Lebenswert wins this competition by an extremely thin margin. However, for parents interested in ingredient traceability and accountability, and sustainable agricultural practices, Holle is the winner. By compomising a bit on those aspects, Lebenswert is available at a slightly lower price than Holle.

You won't go wrong either way, they are both excellent baby formulas!

Holle is not only one of the biggest and most popular European baby formula companies,...

Lebenswert organic formulas were introduced in 2009 by the biggest and most popular...

HiPP Combiotic and Holle baby formulas are two of the best-selling and most popular baby...

Holle and Loulouka baby formulas are a bit like the David and Goliath battle of European...