Baby Products Made in the USA - 35 Options

We get tons of messages on email and social media asking which baby products are made in the USA, which baby gear companies are US-owned, and where materials are sourced. These questions are becoming more frequent as the US looks inward to help business owners climb out of the current health and economic crises.

Whether you are motivated by helping the US economy, trust US manufacturing practices, or like the traceability of US-made baby gear, this list is for you! Check out the table of contents to quickly navigate around the article.

Car Seats Made in the United States:

A couple notes about this. First, the Britax car seat parts are sourced from all over the world, including China, and then some of their car seats are made with these parts in North Carolina. Some Britax materials say the car seats are "assembled" in the USA, and some say "Made in the USA" which can be confusing.

Second, until recently, Britax booster seats were not made in the USA; as of July 2020, our representative at Britax confirmed that all Britax booster seats are assembled in the USA, in their South Carolina facility. The representative also said that Britax strollers are now assembled in the USA from global components, but we're not certain whether that's truly the case (there is conflicting information from them).

Here are Britax car seats made in the USA:

Evenflo has been headquartered in the United States (Boston, MA and West Chester, OH) for over 100 years, and many of their car seats are made right here in the USA. Like Britax, some parts and components are sourced from all over the world, including China, and then assembly is done in the USA.

Here are Evenflo car seats made in the USA:

Maxi-Cosi is a popular European brand that is owned by Dorel Juvenile, which is one of the largest baby gear manufacturers in the world, based in Montreal, Quebec, Canada. Many of their car seats are made in the USA in their Columbus, Indiana factory, and we list those below.

Here are Maxi-Cosi car seats made in the USA:

Like Maxi-Cosi, Safety 1st is owned by Dorel Juvenile (Montreal, Quebec, Canada), but manufactures some of their car seats in the USA, in the factory in Columbus, Indiana.  is a popular European brand that is owned by Dorel Juvenile, which is one of the largest baby gear manufacturers in the world, based in Montreal, Quebec, Canada. Many of their car seats are made in the USA, and we list those below.

Here are Safety 1st car seats made in the USA:

Where are Other Car Seats Made?

While Britax, Maxi-Cosi, Safety 1st, and Evenflo at least assemble some of their products in the USA, many other major car seat manufacturers do not. Where are their products made?

Where are Clek Car Seats Made? These popular car seats, like the Clek Foonf and Clek Fllo, are made in Canada. And this is actually true, the car seats are fully manufactured in Canada, by the Canada-based company, using globally-sourced parts. And they are truly kick-butt car seats; so if North America suffices, definitely check them out. We review the Clek Foonf and Fllo in our best convertible car seats and narrowest car seats round-ups.

Where are Graco Car Seats Made? Some of the top-selling car seats on the market are made by Graco, including their popular infant car seats (e.g., Snugride line) and convertible car seats (e.g., Extend2Fit, 4Ever). Graco is owned by Newell Brands, based in Philadelphia, PA, but from what we've seen in our testing, their car seats are typically made in China.

Where are Diono Car Seats Made? Diono makes some of the best convertible car seats, including the popular Radian 3RXT, and booster car seats on the market. They are a US company (Seattle, WA), but the Radian 3RXT is made in China, but some of their booster seats are made in Denmark.

Where are Peg Perego Car Seats Made? Peg Perego is an Italian company based outside of Milan, Italy. They sell many popular and high quality car seats, including the Primo Viaggio series, which are all made in Italy.

Where are Cybex Car Seats Made? Cybex was started in Germany and then merged with a large Chinese baby products company called Goodbaby International. Currently, the Cybex Aton and Cloud appear to be made in China, whereas the Cybex Sirona convertible car seat appears to be made in Germany.

Where are Baby Jogger Car Seats Made? Baby Jogger was started in 1984 in the United States, but was purchased by Newell Brands, based in Philadelphia, PA. The current range of Baby Jogger car seats, including the City GO and City View, are made in China.

Where are Doona Car Seats Made? Doona is made by CuddleCo, a company based in the United Kingdom. The Doona combination stroller and car seat was launched in China and is made in China.

Where are Nuna Car Seats Made? The popular, stylish, and high quality Nuna Pipa and Nuna RAVA car seats are both made in China.

Where are Baby Trend Car Seats Made? Baby Trend was founded in 1988 in Ontario, California, but was acquired by Alpha Group in 2016. Alpha Group is based in China, where all Baby Trend car seats and other products are made (except for their diaper pail, which is made in California).

Strollers Made in the USA

Nearly all of the best strollers sold in the USA are made in other countries, primarily China. 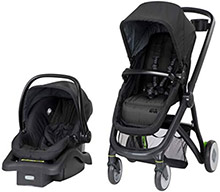 There is one new exception that stands alone as the only stroller made in the USA: The Safety 1st RIVA!

The Safety 1st RIVA is made by Dorel Juvenile in Columbus, Indiana, and is primarily sold as a travel system along with the Safety 1st Onboard 35 FLX, which is made in China. So while the RIVA stroller itself is made in the USA, the included infant car seat is made in China. Odd choice by Dorel, who was trying to appeal to the US consumer market increasingly interested in US-made baby products.

Crib Mattresses Made in the USA

Bassinets Made in the USA

Classic bassinets, including the traditional wicker style and wooden bassinets, were commonly made in Europe and the USA. Nowadays, it is rare to come across bassinets made in the USA. In fact, even the most popular and expensive bassinets, like the $1400 SNOO, are made in China.

The same goes for all of the best bassinets in our annual list, including the HALO Bassinest, Mika Micky, Fisher Price bassinet, Graco Dream Suite bassinet, Baby Delight, Summer bassinets, and more. All made in China. The popular Baby Bjorn Cradle bassinet is made in Bosnia and Herzegovina.

There are a few exceptions to this, however! 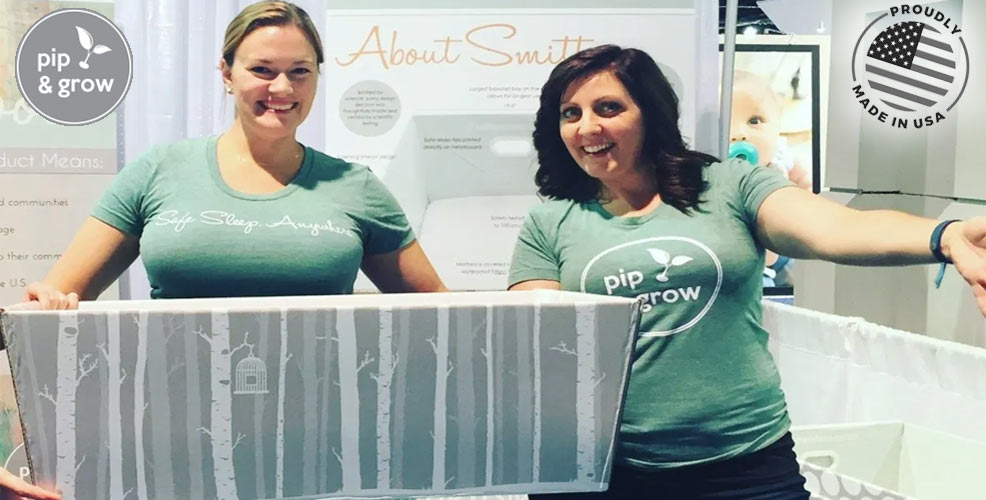 Pip & Grow, based in Portland, Oregon makes a series of adorable baby bassinets right here in the USA. The moses boxes include a simple cardboard surround with a 1" thick CertiPUR-US certified foam mattress. They are a simple and elegant solution to the increasingly expensive, complicated, and cumbersome bassinets available on the market. Most importantly for this article, the Smitten boxes are made in the USA!

2. Moses Baskets Made in USA 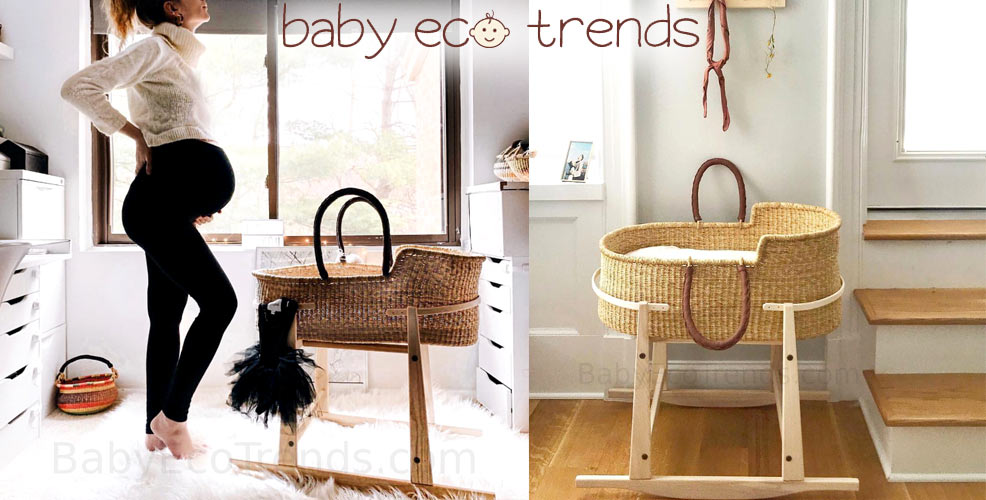 Baby Eco Trends, based in Athens, Georgia makes beautiful woven moses baskets and stands, all right here in the USA. The moses baskets can be purchased alone or along with a moses stand, which props your baby up to the level of most bassinets. The same company also sells a series of Amish bassinets and cribs, all made in the USA.

Baby Carriers & Wraps Made in the USA

The good news, however, is that some of the best baby wraps and carriers are made right here in the USA by American-owned companies! These include: 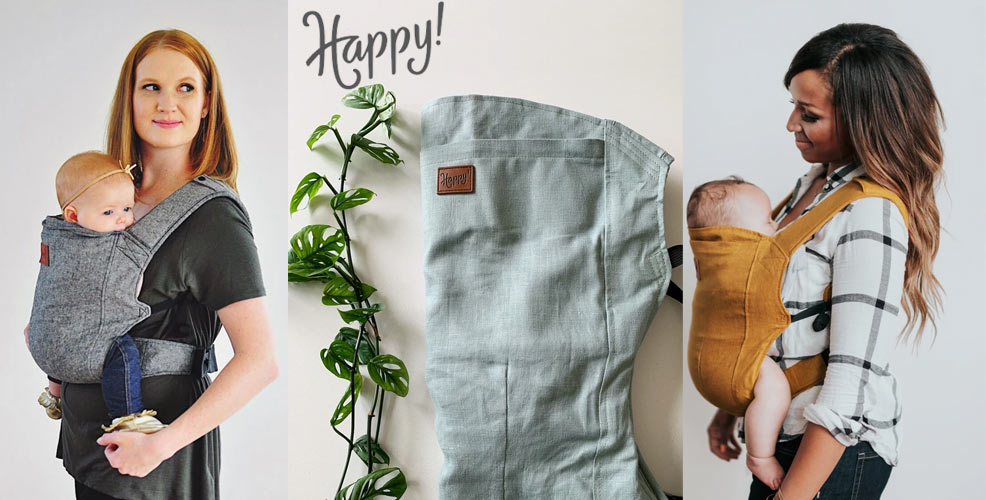 One of the only soft-structured baby carriers still made in the USA, the Happy baby carrier is not only American owned and made, but it's also soft, supportive, high quality, and totally adorable and unique. For parents looking for stylish and subtle patterns and colors, quality (imported) fabric, and excellent construction, definitely check out the Happy brand!

2. Solly Baby Wraps Made in USA 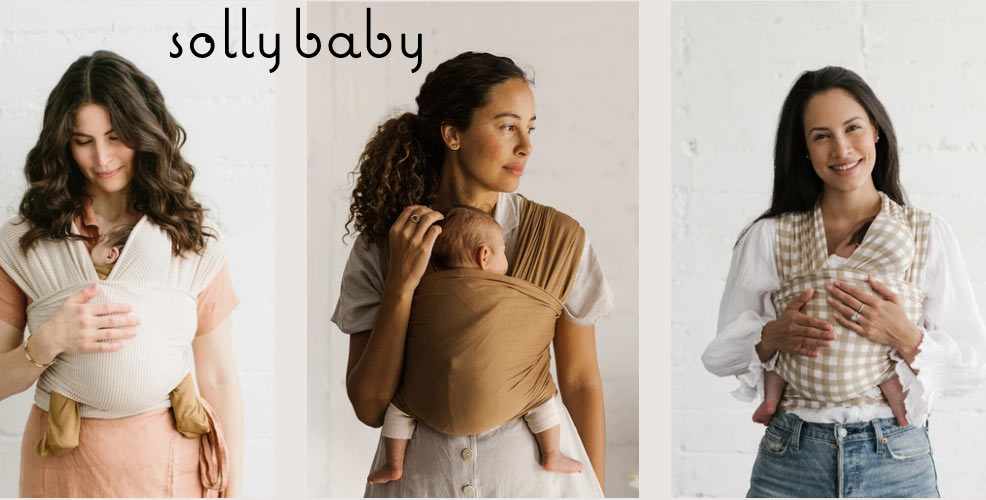 We cannot express how much we absolutely love Solly baby wraps! They are soft, strong, versatile, come in beautiful colors, and are made with luxorious fabrics. Even better, they are made in the USA and American-owned, and source their fabrics sustainably from europe (like Austria) and other regions! Click the image or here to learn more about the Solly wraps.

3. Boba Baby Wraps and Carriers Made in USA 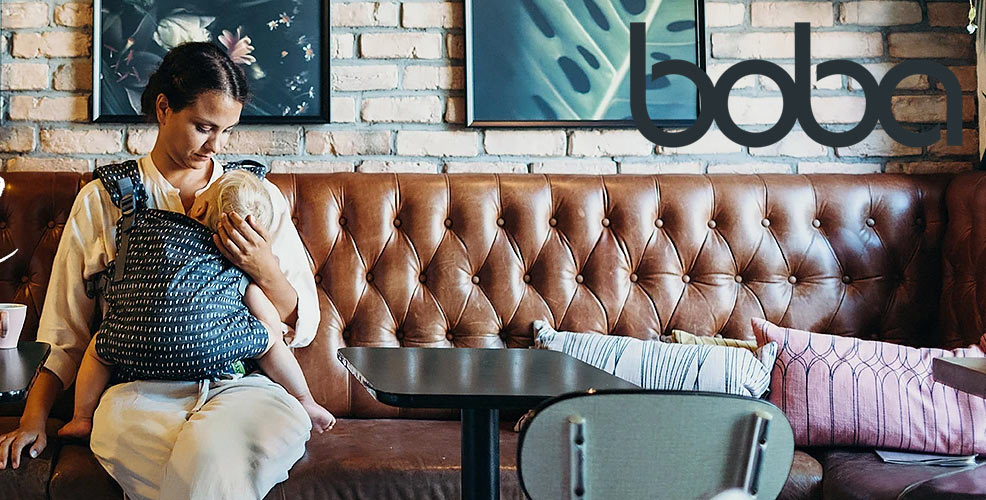 Boba baby wraps have been at or near the top of our best baby carriers list for over 5 years now, and for good reasons! First and foremost, they are made right here in the USA from organic cotton, including an organic cotton liner with fabric sourced from Texas. Second, they are truly awesome, soft, strong, versatile, and reasonably priced! Click the image to learn more about the Boba baby wraps and carriers.

What Does "Made in USA" Really Mean?

Finding baby products actually made in the USA ended up being harder than we expected. In our testing, we often notice that many of the boxes and packaging say things like "Assembled in the USA," "Designed in the USA," "Engineered in the USA," or "Molded in the USA." Then, when you open up the packaging and look at the actual product labels, it says something like "Made in China" or "Made in Vietnam."

Have a product to add, or want us to review another category? Visit our facebook page and send us a message!

Are the best convertible car seats out of your price range? Every family has budget...

The Best Booster Seats of 2021

The booster car seat is the perfect way to ensure safety when your child outgrows the...

You might be in for some surprises the first time you try to fit 3 car seats in a row!...

The infant car seat is one of the most important purchases you will make as a new...